Don't get left out in the storm, be prepared! Storms may cause limbs or entire trees to fall, often landing on homes, cars, other structures or other trees. Preparations can be taken to help your trees "weather" storms a lot better! In the event that you do have storm damaged trees, remember that they can be very dangerous to remove or trim, but prompt trimming of the injured limb(s) will encourage wound closure. Our arborists can assist in performing the job in a safe manner, while reducing further risk of damage to your property. 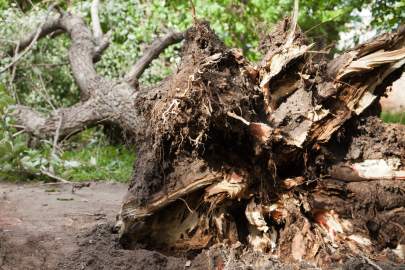 One of our customers put it best.

"Thank goodness you got our trees done before Monday's Isaac weather hit us. What a difference clean, clear healthy trees make."

Our Atlantic hurricane season runs from June 1st through November 30th. We have been fortunate the last few years, but recommend everyone continue to take precautions!

This video by Dr. Doug Caldwell, Collier County Extension Agent illustrates problems that can show up if proper preparations are not made before a hurricane hits.

For a fully keyboard-accessible alternative to this video, view it in Chrome or on any Android or iOS device, view it in Firefox with the YouTube ALL HTML5 add-on installed, or disable Flash in Internet Explorer.

Opening: How to prune your trees for hurricane safety, for their health & beauty. Presented by Doug Caldwell, Ph.D

Doug Caldwell:
Hello, this is Doug Caldwell, Collier County Extension. We're here helping you beautify your landscape and protect the environment. This oak tree in back of me looks pretty nice from a distance, we're going to take a closer look and point out some things you need to be aware of as we head into hurricane season to help you protect the tree as well as your property. The first problem we see and it's a major problem is instead of having one main leader, we have two. What's the big deal about that? Well as you look down here, these trunks are pushing against one another this is an extremely weak point, which in a high storm, high wind event hurricane event, these are going to split apart and they could come crashing down on your house or your car or a person, let alone the tree being destroyed. The second problem we see are these crossing branches, their rubbing against one another. Not only on the branch here but branch up here. This is going to cause decay and possible breakout in the storm. This should have been resolved much earlier when the tree was younger. Now you've got to make cuts on four to five six inch diameter branches which is going to take the tree a longer time to repair itself or compartmentalize the wounds so that there's no decay. It's very important when you're making a pruning cut not to do a flush cut, a flush cut is when you whack off this branch right next to the main trunk, and that leads to decay. Well, the alternative is you should make what we call a collar cut. This is a very important term to know a collar cut is when you come out a little bit, and you cut just right outside the collar or the swollen ridge, which isn't evident on all tree species as much as some but you look for that swollen ridge, and you make your cut outside that swollen ridge. This leaves canbio tissues that grow like you're starting to see here like a doughnut and seal up the wound to prevent decay. If you look real closely it sort of blends in with the bark, but you can see where you had a branch removed, and it's compartmentalized or sealed itself up entirely, you're not going to have in fact, infection or decay here when you make a proper pruning cut like this. So here's the fourth issue on what looked like a pretty good tree from a distance. This is a stub cut. In other words, the branch have been removed down to the collar this swollen area, but instead, a large amount was left this is going to decay. And the decay will go not only from this little branch but also into the main trunk and cause decay, which could eventually cause the entire tree to fail. And that's not good when you have high winds blowing like to do in a hurricane.

Often, homeowners are approached by landscapers saying they'd like to help you protect your trees from hurricanes by doing a hurricane pruning. Well, there's no such thing in the jargon of a professional arborist. What we do like to talk about is no GTO that stands for no gutting, topping, or over lifting. Gutting is when the tree is thinned out, all the small branches are removed over off of the main branches and all the foliage is at the tip of the branch. When you think of a lever, this throws the weight distribution of that branch off weight, off balance. So you're going to have too much weight on the end of that branch and needs to be evenly distributed on that branch. And you look at over lifting the branches or bits removed from the lower canopy, there's hardly any main branches until the very top of the canopy. This is a creates a weaker structure by thrusting all the weight of the branches and the foliage to the top of the canopy. It's a unbalanced lever system. And if you look at this branch, and you'll notice that it was just whacked off willy nilly in the middle of the branch and not cut back to a successionary leader that could take over the direction of that branch. There's several branches that were just whacked off in the middle. And that's going to create decay and a messy looking tree as those branches sprout out and it looks like a witch's broom. Let's go over these important GTO principles. In fact, I'd recommend that you have these in writing before you allow anybody with the chainsaw pruners on your property. G stands for no gutting. Guttings when smaller branches are removed along a large lateral branch, resulting in the foliage being at the tips of the branch. This is an unbalanced situation and not healthy for the tree in the long term. T stands for no topping. This is when inexperienced non arborist come in and give you a good price. And they say they'll prune your tree and they whack it back indiscriminately making cuts at the top so it looks like a butch haircut with a bunch of stubs sticking out. The O stands for no over lifting. This is when branches are removed from the main trunk and all the foliage is concentrated at the top of the canopy. The goal should be to have foliage evenly disturbed throughout the entire canopy if you practice GTO, you'll have a better looking tree it'll be stronger and hold up better in our high winds situations we have from time to time.

Although not common we do experience weather conditions harsh enough to cause freeze damage to our trees and shrubs. Protection or prevention of freeze damage is the most desirable way to combat this problem. Plants that are not cold hardy can be covered for protection when a freeze is predicted. We recommend using cloth such as sheets or burlap for this task. Do not use plastic as it can cause burning of the plants.

Delay any pruning of freeze damaged trees until spring arrives and the amount of damage can be assessed by a certified arborist.