The Redbay Ambrosia Beetle / Laurel Wilt Pathogen was confirmed in Indian River County in 2006 and Brevard County in 2007. As a result of this spread, trees of the laurel family, including the redbay, silk bay and avocado, may be at risk.

Typically ambrosia beetles have a symbiotic relationship with the fungus, and the beetles carry fungal spores on their bodies. (Crane 2008)

Ambrosia beetles tunnel in the host tree, construct galleries where they raise their young and plant “fungal gardens” by releasing these spores. The fungus then processes the plant tissue and produces ambrosia which serves as source for nutrition of both adults and larvae. The beetle can also carry spore of disease pathogens that infect the tree leading to the weakening or death of the tree. 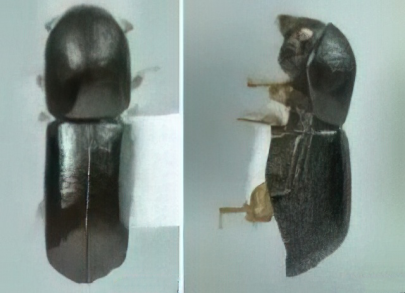 The Ambrosia Beetle is:

Symptoms of laurel wilt can include: